Message from the Chairman

This past weekend we celebrate a Southern Maryland Celebration of Donald J. Trump where our special guest speaker was economist Stephen Moore. Steve a popular Fox News guest and author of books such as Trumponomics: Inside the America First Plan to Revive Our Economy.  The event was a huge success that was held in Huntingtown, Maryland.

Last week the Southern Prince George’s Republican Club met for the first time in 7 months with guest speakers and candidates Chris Palombi (CD-05) and Gary Lee Falls (Board of Ed Dist 8). Following the speeches, we enjoyed a couple of award presentations. These awards would ordinarily have been presented at our Lincoln Day Dinner fundraiser, a casualty of COVID.

First was the Robert A. Yost, Sr. Award. This is presented annually by the Southern Club to recognize outstanding service by a Republican in Prince George’s County.  Phil Parenti bestowed the honor on Kathy Peed, a longtime volunteer for campaigns and special events who was recently appointed to the Central Committee.

Next it was my privilege to present the Chairman’s Award. I knew early in the year that I wanted to honor Kathy Peed. She had supported the central committee and the party in many ways. In addition to those described above, she had taken on publication of the newsletter and was doing work for me in grass roots outreach. I also wanted to honor Jesse Peed. Jesse is a former chairman of this committee, has run for office twice, assisted in fundraising and special events and is always there if I need help with something.

When you get a chance to do so, please congratulate The PGGOP’s own power couple, Kathy and Jesse Peed, this year’s recipients of the Chairman’s Award. 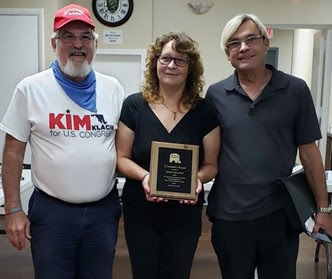